The seemingly chaotic world around us often exhibits remarkable regularities and repetitive patterns, suggesting a simple origin. That in turn can point to the relevance of symmetries in nature, often reflecting a geometric underpinning. Mathematically, the exploitation of symmetries frequently involves algebraic techniques.

In atomic nuclei, the use of structural symmetries or algebraic approaches is one of the most important tools for the study and understanding of nuclear structure. An example is the Wigner supermultiplet symmetry SU(4) or the symmetry SU(3), pioneered by Elliott in the 1950’s to study deformed light mass nuclei in the s-d shell. In heavy nuclei, this symmetry breaks but a well-known approximate symmetry, pseudo- SU(3), has been actively studied for many years. Since the 1970’s, the interacting boson model – based on an algebraic group theoretical foundation – and its offshoots and extensions, has provided a very successful approach to understanding the structure of myriads of medium mass and heavy nuclei. Algebraic methods often provide simple, analytic, and parameter-efficient approaches to the structure of many-body systems. This talk will provide a selected perspective on some of these and then turn to a new entry in this field, an approximate symmetry called proxy-SU(3).

Proxy-SU(3) is motivated by a consideration of the spatial overlaps of certain nucleon wave functions, in particular for deformed nuclei. Like pseudo-SU(3), it exploits a specific orbit substitution to attain a space that can be described by an SU(3) symmetry. This in turn allows a number of parameter-free predictions of the structure of heavy deformed nuclei using the simplest analytic expressions. We will introduce this symmetry, show the nature and impact of the approximations involved, and outline how its irreps can be used to make specific predictions of the deformation variables  and , of prolate dominance in deformed nuclei, and of the locus of the prolate-oblate transition region. Overall, the agreement is good, but, at the same time, specific classes of discrepancies point to the need for improvements to the model that take into account missing ingredients. 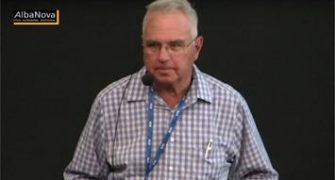