Major galaxies such as the Milky Way are surrounded by swarms of smaller dwarf satellite galaxies. Over the past ~15 years, our knowledge of these satellite galaxies has exploded. The number of known Milky Way satellites has quadrupled, and highly precise measurements of their motions, with the Hubble Space Telescope and most recently with Gaia, have provided unprecedented insights into their complex orbital dance. I will talk about my work that uses the distribution and motion of satellite galaxies to test our ideas of how the cosmos in general, and galaxies in particular, have formed and evolved. Our current leading cosmological model, ΛCDM, was largely developed on cosmic scales and implies that most of the mass in the Universe is dominated by Cold Dark Matter. Simulations of the formation and evolution of galaxies based on this model predict a highly chaotic tangle of satellite dwarf galaxies around their more massive hosts. In contrast, the observed situation resembles an ordered choreography: satellite galaxies around the Milky Way, Andromeda, and Centaurus A are aligned along “planes of satellite galaxies”. Many satellites also move along these structures in a common direction. I will discuss why this finding poses a serious challenge to our leading model of cosmology, whether there is evidence that the inclusion of baryonic processes in simulations can alleviate the existing tension, and why all suggested scenarios for their formation are currently unable to solve the issue. 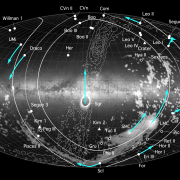